ARE YOU A COMFORT ADDICT AND UTTERLY ADDICTED TO INDULGENCE?

Comfort addiction is everywhere in 2019. Comfort addiction is everywhere in 2019. There are TED Talks, rehab treatments and academic articles devoted to this new-age compulsion.

The privileged have always had their foibles: musicians tour with ‘Ambience Directors” to ensure their every whim is catered for in distant lands. Keith Richards has a shepherd’s pie made for him before every Stones gig, however far-flung. These comforts can be as incidental as the little bottle of Tabasco sauce that Hillary Clinton always carries in her hand luggage, or as mundane as Kate Moss’ cashmere travelling blanket; Lionel Richie takes his own scented candle to ward off unsavoury smells and make places ‘feel like home’; and some of us always request the same table at our favourite restaurant. Too much comfort lowers resilience and with it the ability to deal with challenges. Image via UK Elle Decoration.

Comfort is everywhere, however, it is a vice about which few are willing to go on the record. ‘Comfort addiction is little talked about because sufferers know that it’s a pretty unattractive condition,’ says Simon, a private banker who was born with a silver ladle in his mouth. ‘I’ve started to decline weekend invitations away because you can never be sure whether the mattress will be firm enough, the sheets clean enough or the bathroom en suite,’ he says.

But are we becoming so addicted to comfort that we’re prepared to forego time with friends just so as not to feel any discomfort?

On the whole, no, though anxious comfort addicts think nothing of bringing their own pillows and pillowcases wherever they go. And those with reason to doubt their host’s standards will pack – or more precisely, have packed – an emergency hamper of food and wine.

There are, of course, varying levels of creature comfort. The late Karl Lagerfeld not only travelled by private jet with his own bookcase, he also went to extraordinary lengths to cosset his guests, too. ‘Karl built a tennis court on his property at Biarritz as an enticement for me to visit,’ Anna Wintour told guests at a past British Fashion Awards, as she paid tribute to the designer. ‘He was trying to give me somewhere I could feel at home, a place where I could be myself.’

That’s nothing. It is rumoured that when King Salman of Saudi Arabia was due to stay at the One & Only Reethi Rah in the Maldives in 2017, he asked for exclusive hire of the hotel and that it be repainted and fitted with gold handrails. At his request, a hospital was apparently built on-site, and nannies, personal trainers, security and chefs were flown in by private jet. In the end, the King never turned up. Comfort is about convenience, privacy, and safety. It makes you feel temporarily better. It soothes away from life’s irritants. Image via UK Elle Decoration.

On a more modest scale, another hotelier confides that it’s typical for guests to arrive with their own pillows and duvets. ‘They don’t like the idea of sleeping on the same bed linen a thousand other people have slept on before. They prefer snuggling up in something that feels like home.’

Several moneyed millennials admit to finding their own space (hygge’d and Oka’d up) so comfortable that they won’t stay in hotels or sleep at their friends’ houses – ever.

Comfort – just like alcohol, sugar or cocaine – makes you feel temporarily better. It soothes away life’s irritants (like waiting an eternity for the hotel room’s Wi-Fi to boot up). But when there’s less (or none) of it, all hell breaks loose. ‘Standards inflate over time,’ says Dr Robert Biswas-Diener, co-author of self-help book The Upside of Your Dark Side. ‘When you’re a student, a futon seems fine. By the time you’re 40, you can only sleep in a super king. It’s a natural progression.’ It’s all about comfort inflation and – crucially – expectation. ‘Business class gets you off and on the plane first. You sit by yourself. If you’re flying economy and you’re upgraded, you’re elated. If you’re flying business and are downgraded, you’re fuming. It’s easier to adjust upwards than downwards,’ says Dr Biswas-Diener. 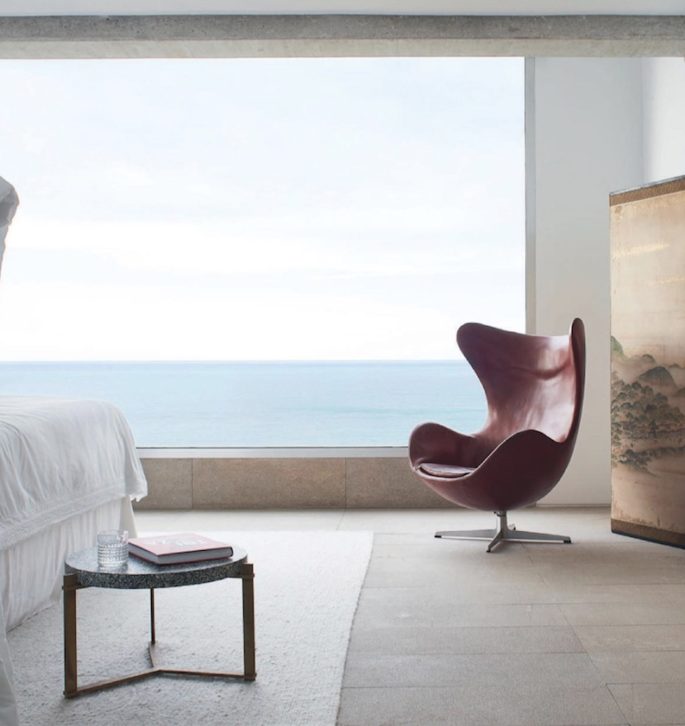 Several moneyed millennials admit to finding their own space so comfortable that they won’t stay in hotels or sleep at their friends’ houses. Image via UK Elle Decoration.

He’s right. We quickly adjust to our new standards and then want more. One journalist who started dating above his station found himself staying in two very grand and fully staffed country houses in a row, where every bed was made and every discarded garment washed, ironed and returned within hours. A fortnight later, when he was a guest at a very desirable Georgian manor in Worcestershire, he was, he says, ‘shocked’ to find he was expected to make his own bed. No surprise there: it’s easier to have a chauffeur than to drive, and to drive than take the bus, and to take the bus than to walk. Comfort is, says Dr Biswas-Diener, about convenience, privacy and safety. ‘It is all about control. When you’re lumped in the economy you have no idea who you will be sitting next to.’ Or, as George Harrison once said, ‘Do you remember when we were so poor we had to fly first class?’

Hell is clearly other people, and to avoid them, the wealthy have become so pampered, so removed from the hubbub of daily human interaction that they install home gyms, cinemas and hair salons as standard.

And beware any sudden withdrawal of comforts: it’s prone to throw the sufferer into a combination of acute anxiety, helplessness and rage. Why do you think that Glastonbury offers luxury glamping and there are five-star Aman hotels in Bhutan? Comfort addicts want to do what everyone else does, but their fear of discomfort is even greater than their FOMO.

Alas, when you can no longer travel to countries that don’t have a Four Seasons, your world shrinks – as well as your brain. Too much comfort lowers resilience and with it the ability to deal with challenges, says Norman Doidge, author of The Brain That Changes Itself. ‘It is the willingness to leave the comfort zone that is key to keeping the brain new.’

So what is the antidote? A slow, steady drip of discomfort, according to the experts, such as taking the tube at rush hour on a hot summer’s day. One couple sleep in a standard double – the wife believes it helps to retain the edge. ‘And I keep the heat low to maintain a sense of superiority,’ she says.