SPRING IS HERE. WHAT TO KEEP AND WHAT TO THROW AWAY

Spring cleaning. The phrase has associations with thumping carpets with sticks and polishing the silver. 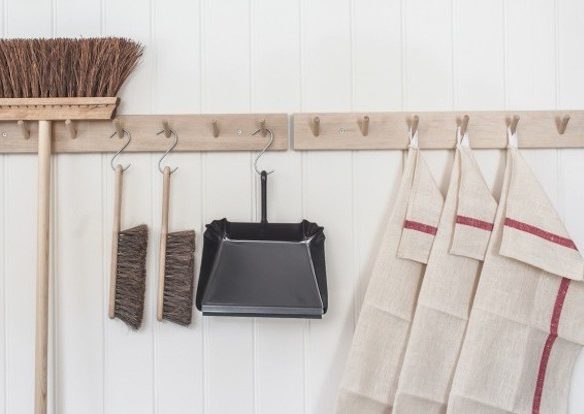 These days most people hardly clean, let alone spring clean, despite the fact books on spring cleaning are on bestseller lists, supermarket shelves bulge with ever-more-specialised cleaning products and frilly pinafore apons are walking out of shop doors.  The secret is to do a big edit of what you own and chuck out everything that compromises your taste.

Don’t be sentimental. Only keep things you love, toss out everything that’s chipped, tarnished, dated, ugly or depressing.

Get them valued and, if you don’t like them, sell them. Once you get rid of them you’ll feel liberated.

Sort your clothes into ‘keep, ‘good Samaritan’ and ‘bin’. Everything torn, saggy, shrunken, old, mouldy, smelly or stained goes straight into the bin.

It’s time you got rid of every piece of depressing underwear. Even if no one sees it – you do.

Keep only things that are as beautiful as the day you bought them. Don’t hold on to stained sheets or cardboard towels.

Don’t let your benchtop deteriorate into a chaos of bills, quotes, parking fines, school notes, reports, appointment cards and, invitations. Get on top of it.

Get a big bin, and work through one shelf at a time. Anything past it’s use-by-date, weevily, rusty, or downright weird goes straight in the bin. Chuck out that giant bag of paprika you’ve been using since 1990 and the remains of the rice flour you bought for a single recipe that you’ve never used again. Put things back in logical groupings, as if were a mini-supermarket. Decant packets into containers: it looks good, avoids mess and keeps the moths out.

Keep that bin beside you and keep filling it. Chuck out rusty cake moulds and anything in the shape of cartoon characters or numbers. Buy some life-changing non-stick

When you’re done with chucking out, keep things in their place. Store things where they will be used, based on frequency of use. Keep the sticky tape close to the scissors and wrapping paper. Store knives near chopping boards. Group similar items together. Put items you use once a year – such as sleeping bags or tents – in the storeroom or garage.

Empty it out. Vaccum all the mysterious grit that collects in the draw and wash the cutlery holder. Everything that is unmatched should be chucked. So should anything old, useless or bought as a souvenir. Keep only the cutlery you use everyday – but make sure it’s good.

This is where matchboxes jumble with string, out-of-date warranties, gummed-up tubes of superglue, blobs of Blu-Tack, dead batteries, keys that don’t open anything in your house and numbered birthday candles that don’t add up to the age of anyone you know. Chuck out the lot.

This is the dark secret in every home: the repository of every  house.

Here reside the ultimate space invaders. You may swear by your rice cooker, ice-cream maker and juicer. If, however, you swear at them, they have no place in your life. Apart from a toaster and an electric kettle, the only kitchen appliances a real cook needs are a food processor and some electric hand-held beaters. Be ruthless.

Assess your knick-knacks and vases. Why are they on display? Do you like them? Are there things in your cupboards you like better, things that say more about you and less about the person that gave them to you? Make executive decisions.

The bathroom cupboard is another dark corner of everybody’s life. That space under the sink should contain fresh rolls of loo paper, cakes of soap, and a few extra hair and make-up products – that’s it. You know what to do with the rest.

Dump all those books you’ve never cooked from, plus anything bought to raise money for a school. If you have twenty books that are each only good for one recipe, rip them out and create your own secret recipe-folder.

Cheap toys have done more to ruin good houses than the worst interior designers from the Seventies. Brightly coloured plastic might stimulate young children, but its charm quickly palls. Once your children can start reading, start culling. Wait until they’re out for the day.

The place where old fitness equipment goes to die. If you think you need to double the size of your garage, you’re wrong. You need to halve the amount of stuff in it. Don’t turn your garage into a halfway house to the bin.

Now is a good time to ask whether your environment

Our gardens are resonating more than ever, drawing

For now it’s time to look forwards, and start pl

Many of us want more space, more light, more bedro

Now is a good time to ask whether your environment

Our gardens are resonating more than ever, drawing

For now it’s time to look forwards, and start pl

Many of us want more space, more light, more bedro