THE RETURN OF THE GOLDEN AGE DESIGN 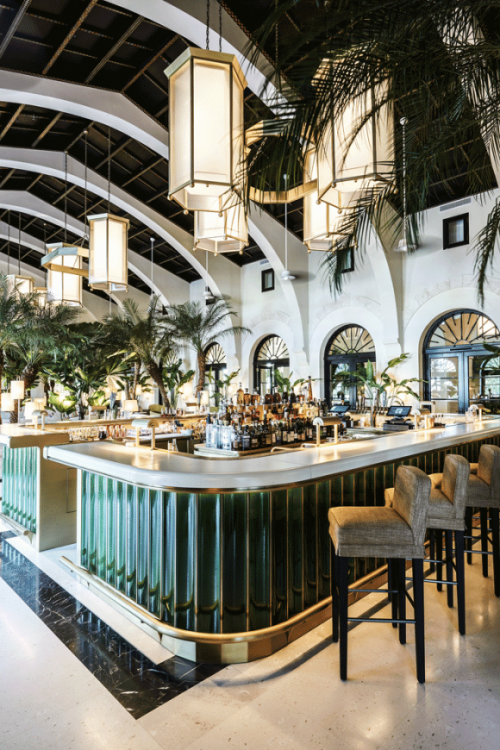 With so many glass towers vying for attention on city landscapes around the world, such as New York City, some developers are looking to the past for inspiration. The result: new buildings with Art Deco and neo-Georgian flourishes. Many could easily be mistaken for structures built nearly a century ago.

For 2020 we can expect to see an increase of Art Deco design on the outside of building, with handsome facades of hand-laid brick, textured limestone, ornate metalwork and decorative metalwork. It’s a theme that will continue indoors, too with Deco-inspired designs, from the cabinetry to lighting and curved corners. 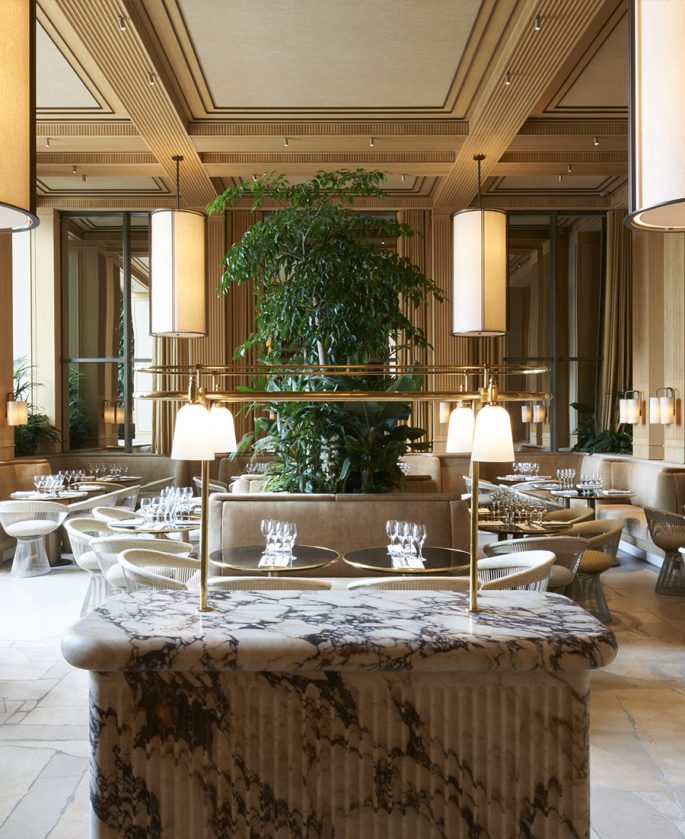 In America buildings based on designs by renowned Studio Sofield, it’s all part of getting noticed in a marketplace now crowded with modern-looking towers. People are drawn to the prewar aesthetic and wanted to create something prewar-like but with modern amenities.It’s much warmer than the glass boxes. Mr. Cohen added.

After watching cutting-edge contemporary residential buildings by starchitects like  Zaha Hadid, Jean Nouvel and Frank Gehry sprout across the city for years, many developers and designers are now looking in the rearview mirror for inspiration. Rather than trying to develop buildings with contorted forms or monastic minimalism, they are aiming to evoke the romantic glow of New York’s past with new buildings that recall Art Deco, neo-Georgian and neo-Gothic style.

The activity isn’t limited to New York Upper East and Upper West Sides, which have long been bastions of prewar style, either.

New residential towers that riff on the grandeur of the city’s storied past — but include all the conveniences and amenities that 21st century buyers of new developments expect — are now rising everywhere.

William Sofield, the founder of Studio Sofield, sees the activity as part of a broader trend that is bringing renewed interest to artisanal, handcrafted goods of all sorts, from hand-stitched leather handbags to bespoke, workshop-made lighting and furniture.

“It became this huge obsession, across the board, of things having quality, and things being handmade,” he said. “All of a sudden, glass towers felt cold, icy, alien. People went back to these things that had material quality to them.”

Mr. Sofield, who has designed fashion boutiques for brands including Tom Ford, Derek Lam and Coach, along with a wide variety of private homes, is also at work on the interiors of another Manhattan condo that plays off New York’s storybook past: 111 West 57th Street. 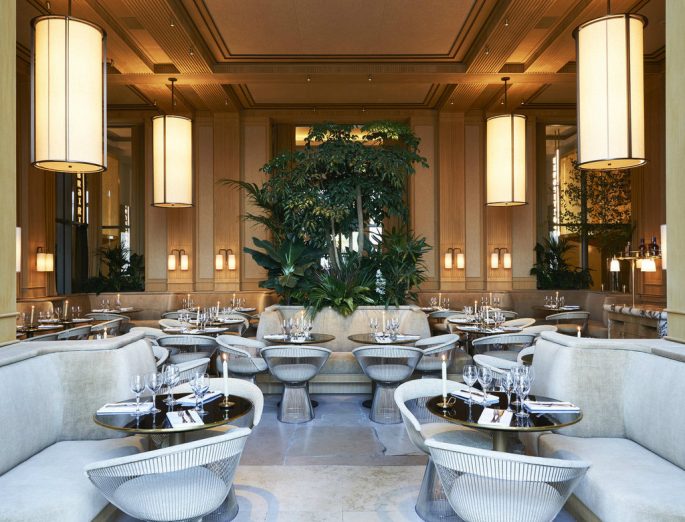 That 1,428-foot-tall project, which was designed by SHoP Architects with a breathtakingly slender form that could only be realized with contemporary engineering, nevertheless nods to Art Deco with a stepped profile and facade of undulating terracotta and sinuous bronze metalwork. Inside, the building offers sumptuous interiors featuring dark-hued woods, onyx and custom bronze hardware. A trend that you can expect to see creeping into interiors everywhere. People really appreciate the historic character.

Given today’s unpredictable political climate and erratic world leaders, Mr. Gesue is betting that buyers will seek out homes that feel familiar and comforting.

“We thought this romantic notion might be something that people would clamor toward in these uncertain times,” he said. According to Colin Ellard, a cognitive neuroscientist focused on the intersection of psychology and design at the University of Waterloo in Canada, Mr. Gesue may be on to something. Dr. Ellard pointed to the concept of mortality salience. “When people are made aware of their own mortality, their tastes, preferences and attitudes change,” he said. “They are pulled toward more conservative values.”

But buildings made of brick and stone have other, enduring appeals too. “Traditional designs tend to be a lot more biomimetic — they tend to be more similar to the features of natural environments,” Dr. Ellard said. “They resonate with these ancient circuits we have that lead us to prefer things that are natural.”

Or course, a hint of New York’s bygone glamour doesn’t hurt either.

“Who of us has not dreamed of living in the San Remo, the Century or those great, classic, Upper West Side residential buildings,” said Adam Rolston, a partner at Incorporated Architecture and Design.

Hoping to design something that will become similarly iconic at the Vandewater, a condo at 543 West 122nd Street in Morningside Heights with the developer Savanna, Mr. Rolston said his firm took its cues from nearby landmarks to give the structure an immediate sense of history. “We thought of it as a Venn diagram combining the neo-Gothic architecture of Riverside Church and the neoclassical architectures of Columbia, both of which are predominantly rendered in limestone,” he said. “It’s a deep contextual play.”

The Vandewater has a concrete-and-glass exterior, but the colouration and stepped details of the concrete are meant to evoke limestone, while piers become gradually skinnier as the building rises to give the 33-story, 183-unit structure an added sense of verticality. Inside the units themselves, which range in price from $920,000 to $6 million, “it needed to feel more like your favourite corner of the Avery library than some master of the universe penthouse,” Mr. Rolston said. “There are rich browns and pewter hardware that evoke this kind of old-world materiality.”

To be clear, none of these new towers are copies of buildings from the past. They generally include the big kitchens, expansive bathrooms, high-end finishes, soaring ceilings, large windows, up-to-date building systems and acres of amenities that are now de rigueur, while largely eliminating relics of the past, like tiny maids’ rooms for live-in help. And, from the street, some of them still look shiny and new, even as they nod to the past.

“Obviously, it’s not an Art Deco building in the sense that the Chrysler Building is, but it’s these little touches that make the building interesting,” said Art Hooper, the president of Ceruzzi Properties, who credited the company’s founder, Louis Ceruzzi Jr., with setting the design direction before his death in 2017. “He would never build just a plain glass cube,” Mr. Hooper said. “He wanted to dress it up.” 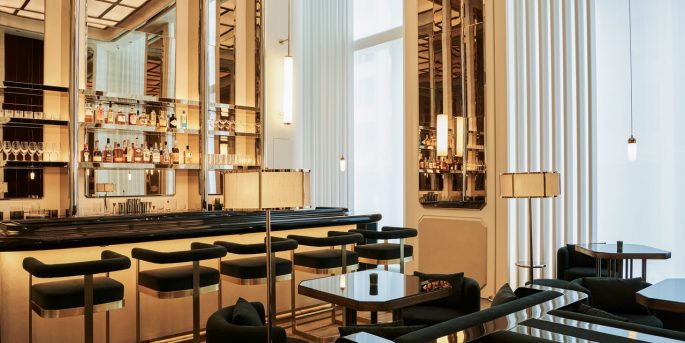 The Centrale’s Art Deco flair makes sense, said Bertrand Buchin, an agent with Douglas Elliman, which is handling sales of the 124 units, priced from about $1.7 million to over $10 million, because the tower has immediate views of the Chrysler Building to the south, and the General Electric Building to the north.

The exterior there will feature vertical bands of bronze-coloured metal with a chevron pattern and a dramatically up-lit crown. Inside, apartments will be completed with materials meant to project warmth and texture, including rusticated wood floors and master bathrooms with dark marble floors, walnut-and-bronze vanities and aged brass fittings.

It was a great building that jumped out as something differentiated. It felt special, like it was not just another building. Everything else was regular glass and steel.

There has been a backlash against all-glass towers, particularly in neighbourhoods or areas that are really seeking to have a highly residential character. Fundamentally, people seek a sense of solidity for tumultuous times.

Over the years, Mr. Stern has designed a string of stately Manhattan condos that set sales records, including 15 Central Park West and 220 Central Park South. Compared to glass skyscrapers, Mr. Stern mused that his masonry buildings appeal to buyers because they look decidedly different from office towers and are eminently liveable.

“You have walls between the windows so that in your apartment you can hang a picture,” he said. “Or, should you be one of those ancient people who still have books, you can have a bookcase.”

Now that glass curtain walls and unconventional forms are almost expected in new construction, Mr. Stern suggested that buildings rooted in tradition are the ones breaking from the crowd. “We are the radical architects,” he said. “We are the architects who draw by hand as we design buildings, who look to the past for formal inspiration and who use wonderful materials, wherever possible, like limestone or brick.”