The most spectacular selfie spot in the world. With a 500kg crocodile carved from a single piece of green onyx for a sink, we can reveal the most luxurious new selfie spot in London if not the world.

Bathrooms have been an unlikely focus this latter part of 2019 – with places such as the Blenheim Palace 18-carat golden loo heist. Since last year’s reopening of Annabel’s, a selfie in the glamorous powder pink bathroom has become something of a social media status symbol (with a staggering 20,000 taken to date). Now, 18 months on, Annabel’s have opened a new lavatory and it is set to take over as the new ‘hot spot’ for indulgent instagrams.

As christened by Victoria Beckham, on her Instagram,  the new loos can be found on the third floor of the exclusive town house. The Loos in the Mews take leafy inspiration from rainforests and jungles and have been designed by the esteemed Martin Brudnizki Design Studio who are responsible for other lavish Birley Group residences (as well as the Soho House Group and the Royal Academy of Arts). 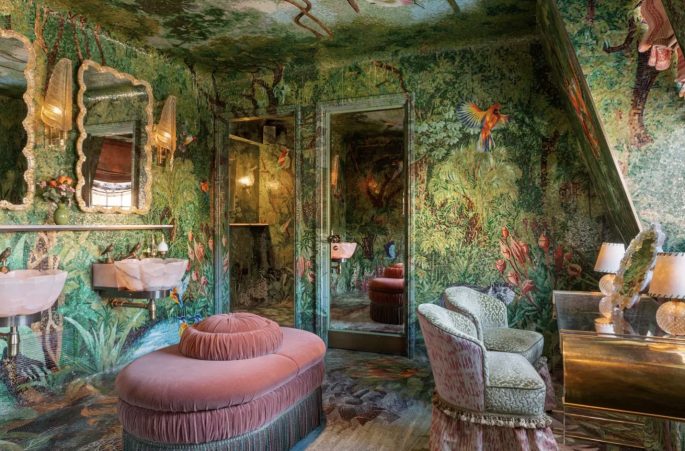 Over four million pieces of mosaic glass adorn the walls, floors and ceilings of the extravagant new restrooms arranged into a pattern of exotic birds and trees that fill the walls of both the mens and women’s bathrooms.

A wash of the hands has never been such a luxurious exercise as in these fabulous new lavatories. For the ladies, it’s the beautiful pink onyx sinks, hand crafted into the shape of Bergenia flower heads that steal the show; whereas for the gents, it’s the 500kg single piece of green onyx that has been transformed into a giant crocodile basin.

Martin Brudnizki revealed his inspiration for the new addition to Annabel’s. “I wanted to build on the Club’s themes of flora and fauna with new bathrooms offering members a similar sense of escapism to the rest of the Club”. He added that the loos are, ‘created entirely in mosaic and spread across the floor, walls and ceiling of the mews, the jungle and animal motifs add to the playful spirit of the place’.

*This is an excerpt from Tatler magazine.