FROM RALPH LAUREN TO LOUIS VUITTON, WHO DRESSED YOUR LIVING ROOM?

The undeniably alluring impact of fashion on our homes.

Home goods also have a longer shelf life than clothes. Some 30-year-old designs are still selling, And there is gold beyond those bed linens. The fashion industry’s reach into housewares extends to tableware and furniture, train and plane interiors, and hotels,

For fashion designers, a love for the home has grown from an occasional flirtation to a full-blown affair. Here are some of the highlights of the movement. Ashley, a 28-year-old Welsh-born secretary who, with her husband, Bernard, was inspired by a women’s craft exhibition at the Victoria and Albert Museum, begins silk-screening place mats, tea towels and scarves (inspired by Audrey Hepburn in “Roman Holiday”) on the couple’s kitchen table in London. The public is charmed by the simple English country look, and the couple add new categories in both home and fashion every year, demonstrating the easy confluence between the two markets. By 1984, a year before Laura Ashley’s death, annual sales total $130 million. Bernard Ashley continues to build the brand, earning a knighthood and gaining Princess Diana as a fan.

When Blass ventures into bed linens through licensees (he will also put his name on towels, glassware and backgammon sets), he becomes one of only two designers to do more than $10 million of wholesale buiness in sheets (the other is Vera Wang). His success prods manufacturers to climb into bed with other fashion stars, including Gloria Vanderbilt, Perry Ellis, Yves Saint Laurent and Halston. The giant textile mills were always looking for a glamorous hook. They themselves didn’t have great brand recognition. Described as a genius, Peretti, who began her career as a fashion model, creates sterling silver serving pieces for Tiffany & Co, that are still in production today. She goes on to design more than 100 household objects for the company in both silver and glass. That same year, Pierre Cardin complements his futuristic fashion looks with his first space-age furniture designs.

Rejecting what he once described as “ugly flowered prints with a guy’s name on it” (Blass’s, presumably, among them), Lauren lofts himself beyond the designer bedding craze to conceive entire environments. For his first home collection, which includes bathroom accessories, rugs, fabrics, tableware and wallcoverings, seven licensees produce more than 2,500 items incorporating four design themes: Log Cabin, Thoroughbred, New England and Jamaica. Based on advance store orders, the new home-furnishing line is expected to do from $30 million to $35 million in its first year, a return that will serve to keep Lauren in favourable regard among retailers, The New York Times reports in 1983. Furniture joins the party in 1985, paint in 1995 and lighting in 2000.

Lauren’s success inspires Calvin Klein, Geoffrey Beene and Donna Karan to follow in his footsteps in the 1990s. 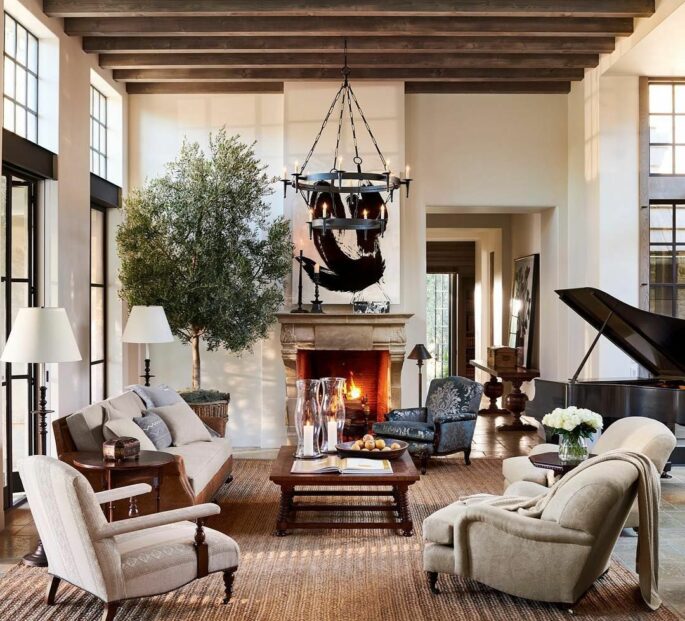 Neutrals layered over neutrals are deftly rescued from blandness by a subtle mix of patterns and textures in this look from 2011.

“You can dress furniture the same way you dress people,” said Carla Fendi, the president of her family’s fashion house, when the company introduced its first collection at the Milan Furniture Fair. (Now owned by LVMH, Fendi’s furniture is currently created by esteemed product designers like Piero Lissoni and Cristina Celestino.) In 2018, 30 years after its founding, Fendi Casa’s sales are estimated to be more than 70 million euros ($82.6 million at the time). Many other Italian fashion companies enter the market — among them, Gianni Versace in 1992, Missoni in 1996 and Giorgio Armani in 2000. Later, Roberto Cavalli, Dolce & Gabbana, Etro, Gucci, and Loro Piana jump on the bandwagon. Rather than seeking licensees or using anonymous suppliers to create its home goods, Diesel, the Italian jeans purveyor, opts for name-brand partners. Andrea Russo, creative director of Diesel Living, forms alliances with well-known product design companies, collaborating first with Moroso for furniture then gradually adding Lodes for lighting, Scavolini for kitchen and bath, Seletti for tableware, Berti for flooring and Iris for tiles. In 2024, the company plans to complete its Diesel-branded condominiums in the Wynwood district in Miami and after that, condos in Las Vegas.

Referring back to its early days producing chic travel gear, the French luxury fashion house founded in 1854 launches Objets Nomades: limited-edition furniture and travel accessories created by famous names in home design, including Fernando and Humberto Campana of Brazil, Atelier Oï of Switzerland and Christian Liaigre of France. Of course, none of this comes cheap: An egg-shaped suspended chair by the Campana brothers currently costs US $96,000; a collapsible leather stool by Atelier Oï (shown) is US $5,650. Louis Vuitton, The Art of Living

As fast-fashion giants like H&M and Uniqlo make inroads into the soft-furnishings market, Zara, which presented its first bedding collection in 2003, forges ahead with furniture. Its division Zara Home introduces sofas, dining tables and chairs, desks, rugs and lighting by the Belgian designer Vincent Van Duysen, who is currently the creative director of the luxury Italian furniture company Molteni. There is nothing disposable about these pieces. The price of the sofa starts at US $6,299.