THIS REALLY IS THE NEXT REVOLUTION IN TV TECHNOLOGY

A TV that turns into a sculptural object. One of the most interesting things we’ve seen this year on the tech front is Bang & Olufsen new Beovision Harmony television, sporting mechanical, rotating panel speakers that are meant to turn the TV into a sculptural object. The television conceals much of its 77 inches in OLED display behind its elegant oak and aluminium sound system, but switch it on and the speakers gracefully fan out. Like a butterfly opening its wings. As the cinematic screen rises to the perfect viewing height offering more than a pristine picture. Read more, ‘Put The TV in Its Place.’

The television itself is a 77-inch LG C9 OLED screen — the same that LG sells for $6,999, although without the transforming speakers. As for the speakers, they house a three-channel, fully active DSP-based sound system. Their unique visual front pattern is made with alternating bands of oak and aluminum, and are supposed to “maximize acoustic performance.”

When it comes to other smart capabilities, the Harmony is integrated with most streaming services. 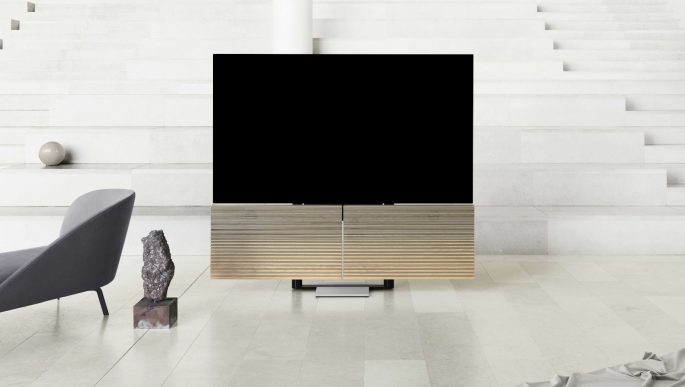 The Beovision Harmony by Bang & Olufsen

Following in the footsteps of other television makers — like LG’s roll-up TV — Bang & Olufsen believes that TVs can be integrated design elements in the home instead of just a big, black screen on your wall. The Harmony is more pleasing to look at than the black bar of LG’s roll-up TV, but some feel the addition of these grand reveal mechanics to the speakers make it feel less like a thoughtful solution and more like a wealth-flaunting ornament. 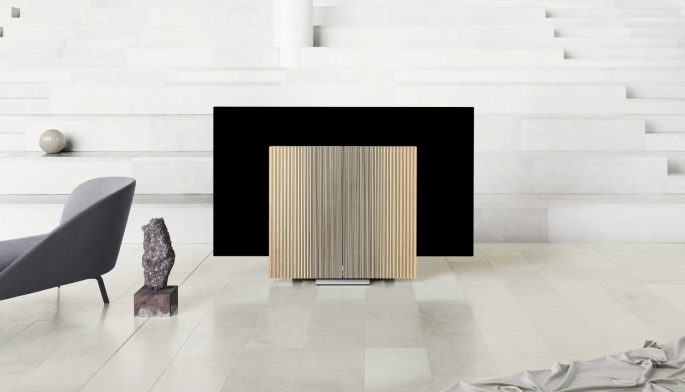 The Beovision Harmony sinks down when turned off. Image via Bang & Olufsen

Sure, it’s a spectacle, but is a novelty television where the selling point is that it plays peek-a-boo worth the sticker shock of around $20,000? Bang & Olufsen bets yes.

“We wanted to create a meaningful object for interiors that reduces the visual presence of the TV and transforms it into something that people will develop an emotional attachment to,” says John Mollanger, Bang & Olufsen’s executive vice president of brand and markets in a media release.

Should you want to shell out over $20,000 for a mechanically winged TV, the Harmony will be available in Bang & Olufsen stores starting October 2019. There will be two colour options for the panels — oak wood and aluminum, or a combined grey melange two-tone fabric and aluminum — and it can be placed on the floor or used with a wall bracket.