THE PREDICTIONS ARE IN: THESE ARE THE BIGGEST DESIGN TRENDS OF 2019 SO FAR As we pass the midway mark for 2019, the year is one of awakening – a time when “woke” consumers are pushing for greater transparency and as our ten trends indicate, a  year shaped by consumer shifts linked to technology, social causes, and trust issues. Consumers are becoming less brand loyal especially among millennials, two-thirds who say they are willing to switch brands for a discount of 30 percent or more.  Shoppers are also becoming more selective. More and more, they base their purchase decisions on whether a company’s practices and mission align with their values—while at the same time they are highly price sensitive. So consumers expect it all: convenience, quality, values orientation, newness, price and sustainability which turns out to be more important that a tick-box exercise.

In the world of fast-moving fashion, the popular interior styles move at a bewildering rate, fuelled by fast production processes and digital retail. Trends sweep by and one season looks very different from another. Here’s how to make your home au courant; with buzzy themes from 70s fabric to far more colourful lighting, Nantucket cliches, and barmy eclecticism which are all resonating right now.

THE SPEED OF CHANGE

Sales of the traditional fast-fashion interiors sector have grown by more than 20 percent over the last three years, and new online players are gaining ground.

To keep up, leading brands are accelerating their speed from design to shelf.

This “need for speed” is driven partly by social media accelerating the movement of trends to the masses, and by industry leaders using analytics and customer insights to meet customer needs better and increase responsiveness.

BEIGE IS ALL THE RAGE

The classic hue’s interior forward update. In a home where you have lots of features such as cornices, using the same colour such as beige modernizes the space, and calms it down.

THE RETURN OF THE SUPER

As we seek solace inside our homes, as they did in the 1970s (a time of political and social turmoil) – we’re reintegrating the same elements with sophistication and polish not seen since the seventies. Look at Molteni & C’s latest imagery shot in architect Romeo Moretti’s villa Carminati as well as Vincent Van Duysen’s new Ratio kitchen with Dada, and you get the idea. THE FUTURE IS HERE

By 2030 we’ll be living in tech controlled living houses, If IKEA’s innovation lab space10 is correct, until then gadgets will become more hidden and helpful. At Milan Design Week – Samsung previewed a refrigerator with a smart-phone-style door displaying apps and a TV screen. Design duo Formafantasma turned volcanic ash into honey-coloured tile glazes for materials company Dzek. And Google Design Studio, with Johns Hopkins Arts + Mind Lab, demonstrated a wristband that read your body’s reaction to interior spaces, mapping the connection between rooms and mood. It’s a wellspring of interior inspiration….We’re continuing to build our interiors around feelings; turning away from many of the values previous generations used to define their homes. Opting for pieces with emotional meaning that bring comfort. We want authentic homes where we can enjoy the simplest and grandest gestures of life. We want our homes to take on more resonance; be a personal sanctuary, and reprieve from the outside world. There is a sense of interiors emerging with a new design language. –  offering a renewed sense of calm, serenity and simplicity that is extremely important for our happiness. We are seeking pared-back aesthetics, with style and personality. Soothing palettes and curated collections.

BACK TO THE PAST

The design world’s biggest show of new product and talent, Milan’s Salone del Mobile held in April, brimmed with an international giddiness and references to the past were a major theme. Yes, a vein of nostalgia hinted at Europe’s unsettled business climate. There was a cavalcade of 1970s references, an enduring obsession with the 1980s, and reissues of early 20th-century designs such as the 1938 Grasshopper chair by Danish architect Finn Juhl. But innovation prevailed at the 58th edition of the show. Ready-to-try trends were plentiful, too. 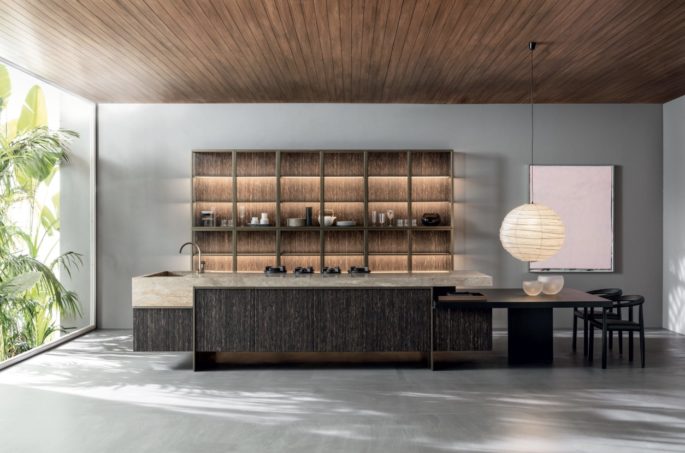 Designers from all over the globe, are taking from the past, what is beautiful from other cultures, with a sure-handed layering of pattern. Fields of poppies alongside bold stripes to feverish wall paintings amid plaids and ikats. English interiors have never been wittier. Green kitchen cabinets with tangerine-coloured ovens and densely patterned traditional wallpaper – barmy eclecticism resonates with the current generation of designers, perhaps as a reflection of a homegrown culture in similar turmoil. To be a proper modern maximalist, you have to have some things and not just ones you pick up at a nice shop — they must be pieces you are attached to, despite their oddness or age.

In England they don’t call up a decorator and chuck out everything they have, or see something on Pinterest and overnight become something new. They keep that thing their grandmother gave them and make it fantastic. The trend is catching on globally. 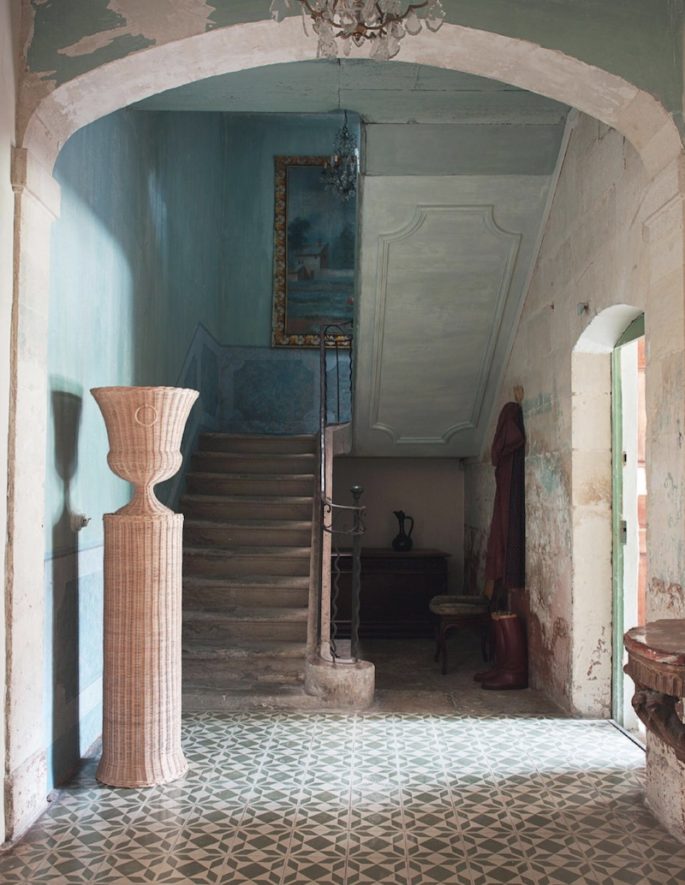 Designers from all over the globe, are taking from the past what is beautiful from other cultures. Image via UK Elle Decoration.

Fabrics with a distinctly 1970s aura are popping up everywhere. Danish textile giant Kvadrat launched cushions at Milan Furniture fair that included wide-wale corduroy in 17 colours and a new palette for shags, velvets and bouclés, all from the hand of fashion designer Raf Simons. Dimoremilano showed knits in saturated stripes that recalled Marcia Brady’s 70s pullovers, and Ilse Crawford turned out natural-fibre wall-hangings and rugs for Nanimarquina.

What is it with the beach this year? It is a wellspring of designer inspiration, both as a metaphor for life — beauty on the surface, danger roiling beneath — and more literally as a traditional escape. The Coastal theme continues to inspire our homes with striped cabanas, lifeguard chairs, seersucker, Nantucket clichés, imagine a state of mind somewhere between Miami and Bora Bora and you get the idea.

Uninterested in disciplined minimalism, a growing number of interior designers are championing England’s long-held preference for colour, wit and  wackiness. Places like 5 Hertford Street, the London membership club in Mayfair, dreamed up by former fashion designer Rifat Ozbak are a baroque temple of joyful excess. Places where you nestle into an attic with walls and ceiling upholstered in Pierre Frey and Schumacher fabric, on down-filled sofas banked with teal and crimson cushions. In defiance of the well-disciplined minimalism of many contemporary interiors, the reinterpretation of the British maximalist tradition — exuberant, proudly eccentric — are inspiring us to create emotional spaces that mix the Cotswolds, India and the Beverly Hills compound of the flamboyant 20th-century artist and designer Tony Duquette. Read more, ‘How to Do Eclectic Style.’

Martin Brudnizki’s recent rococo transformation of Annabel’s, the legendary Mayfair ’60s-era disco-cum-supper club, is influencing a new style of outré interiors that are a celebratory rebuke of industrial, cold spaces. 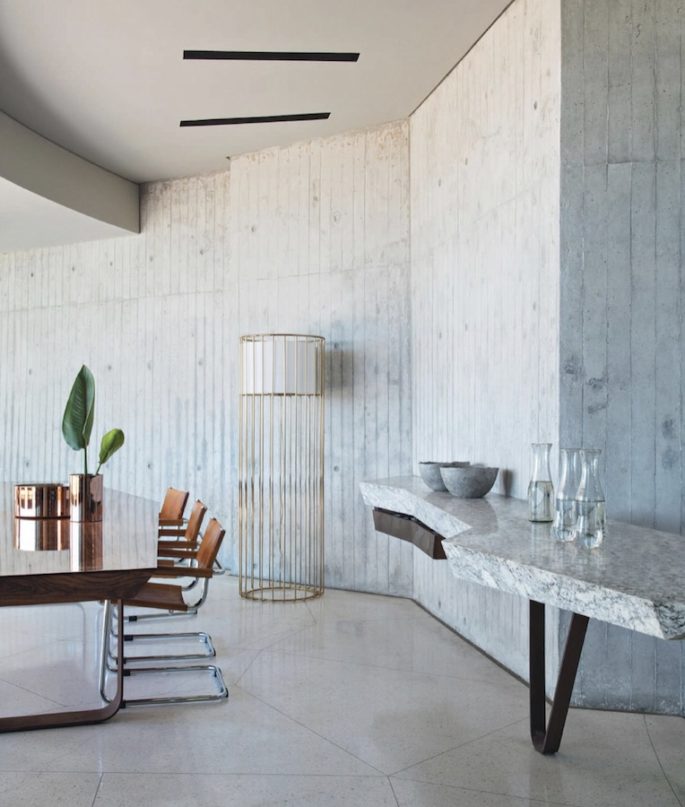 Right angles and sharp edges are taking a holiday from our interiors in 2019. Image via UK Elle Decoration.

FINAL NOTE: THERE WILL BE NO SHARP OBJECTS IN 2019

This season, designers are forgoing straight lines and right angles in favour of sinuous shapes and rounded edges.

Introduce one of these pieces to instantly break up rooms that are arranged on a grid. Seek out pieces like Piero Lissoni for B&B Italia’s Eda-Mame sofa, Charlotte Perriand’s 527 Mexique table or Cassina’s Vincent Van Duysen Elain arm. Also, keep an eye out for furniture where hard exterior frames incorporate built-in cushions. Poltrona Frau has released a new leather-clad bedhead with curves to embrace a long strip of head-comforting upholstery. Other examples: Shanghai’s Neri & Hu for Molteni; a metal-and-leather-framed armchair that has fabric cushions tucked into the side. 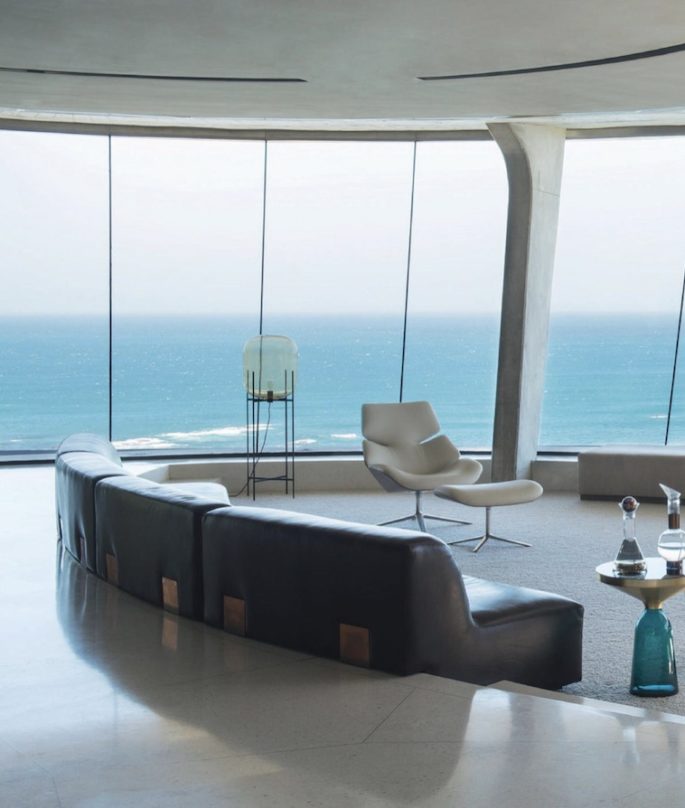