According to a top American newspaper and blogger - it's interesting stuff. A THOUSAND YEARS from now, archaeologists sifting through the rubble will be able to identify early 21st-century homes by their kitchens, says the Wall Street Journal’s Michelle Slatella in a recent column. “The kitchen island will be as recognisable an artifact as the Doric column,” she says. Read on for her thoughts on why kitchens might have become too complicated.

“When I remodeled recently, I wanted an airy kitchen with white-tiled walls, a big window over the sink and a human-scale table, the kind where my grandmother sat when she chopped onions and where families gathered convivially—before the whole world turned into something that looks like a sports bar. But little did I know that dark forces would try to persuade me to incorporate a hulking Brutalist monolith designed to house a second sink and a spare dishwasher no one needs.

“Where’s the island?” my husband asked, poring over the blueprints at a meeting with the architect. “Where will we put the Cuisinart, the KitchenAid—my immersion blender, for God’s sake?” He turned accusingly to the architect, Mark Fischbach. “All my clients are asking for islands,” Mr. Fischbach said, tossing the live grenade back to me. “We’ll have plenty of storage without an island,” I said, putting my finger on the spot where a wall of cabinets would go. “What about undercounter wine storage?” my husband asked. “A separate freezer drawer? A trash compactor?” “A trash compactor?” I replied. “Where do you come up with these things?”

Kitchens have gotten too complicated—and the island isn’t helping. In simpler, less cluttered times, kitchens had a cutting board, a knife, some onions—and a table where you could sit and chop them before tossing them into a pan with a little butter. This gave us everything we needed to fill the house with a lovely smell to reassure everyone that dinner was pending.

The kitchen has evolved from a humble household room to become the main public space in the house. We love that about the kitchen. But I don’t see how having a monstrous, multipurpose, built-in storage bin makes it a better family, entertainment or work area. The kids are better off doing homework at a table than banging their knees against an island. Drop-in guests can be more easily put to work at an elevation where their feet don’t dangle and lose circulation. And cooks of an average height (like, say, me), get more leverage rolling out dough on a 30-inch-high table than on a 36-inch-high island.

Sadly, I know I am in the minority (for now) on this design issue. Among renovating homeowners, a built-in island is the most sought-after kitchen feature after pantry cabinets, according to a 2017 Houzz kitchen-trends survey of 2,707 people. Demand is so high that celebrity chefs are jumping into the game. Rachael Ray, Paula Deen and Trisha Yearwood all have furniture collections that include free-standing islands which, like higher-end versions of the IKEA cart, are designed to add instant storage. “Rachael Ray’s island has functional features such as a well on the work surface, so you can scrape bits and pieces into it,” said Patricia Bowling, a spokeswoman for the American Home Furnishings Association in High Point, N.C.

‘I wanted a human-scale table, the kind that my grandmother sat at when she chopped onions.’

The island trend, which started gathering momentum in the 1980s, is the latest in a long list of design fads to hit the kitchen during its transition from scullery to showroom. The idea of the kitchen as a designed space dates to the introduction in 1898 of the Hoosier cabinet, which with its clever cubbies and work top was marketed as the first all-in-one cook’s prep space. Between then and now, checkered linoleum floors, chrome dinette sets, and massive hanging pot racks all had their moment. Decades of affluence and an increase in the average American home’s size (which grew to 2,466 square feet in 2017) have created a fertile environment for the kitchen island. “It grew along with the megamansion movement,” said Dallas architect Bob Borson. As walls started to disappear and “open” kitchens began to bleed into living rooms, Mr. Borson’s clients started asking for islands to delineate spaces. “I am trying to remember the last time I did a kitchen that didn’t have an island—and I can’t think of one,” he said.

Islands are so ubiquitous that they are rewriting the rules of kitchen design. “We used to design around the three points on a work triangle—the refrigerator, stove and sink,” said Elle H-Millard, a Pennsylvania-based kitchen designer and a trends specialist for the National Kitchen and Bath Association. But these days she’s designing more kitchens in which all the appliances are built into an island: “With an undercounter refrigerator, a cooktop, and a sink, you can place the three points in a linear path instead of a triangle. An island lets you work in a very small footprint.”

Not everybody considers a dining table a dinosaur, however. In a big kitchen, homeowners want both an island and a dining table these days, architects and designers say. “There’s a casual aspect to the island, but there’s a more relaxed and intimate air to meals shared at the table,” said Steven Gdula, author of “The Warmest Room in the House: How the Kitchen Became the Heart of the Twentieth-Century American Home” (Bloomsbury).

In the end, our architect brokered a settlement in the Kitchen War: My husband got a dedicated nook for his cappuccino maker and coffee-bean grinder. And I got my table—sans island. With a reclaimed elm tabletop, its distressed look is impervious to stains, spills and the occasional scorch mark. And the table’s metal frame has wheels, tempting us to wheel it outdoors, where we eat on the patio in nice weather. We can seat eight comfortably in caned wooden chairs—and 12 when we bring up from the basement a folding extension my husband built. If we need it, we drag in the piano bench for two people to share. Original story from the WSJ.com 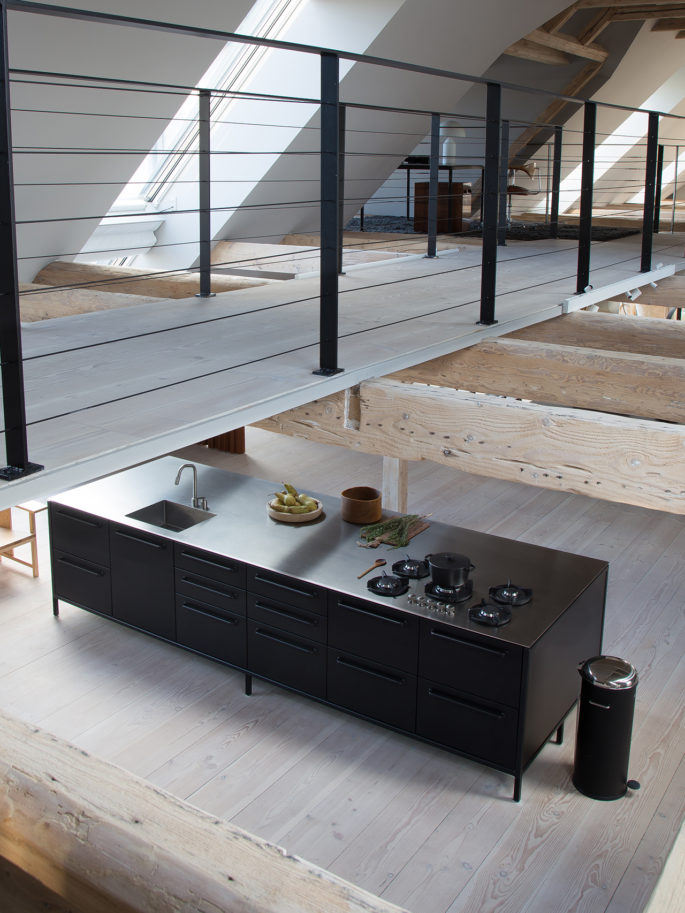