Ever wonder how subway tiles got so popular? 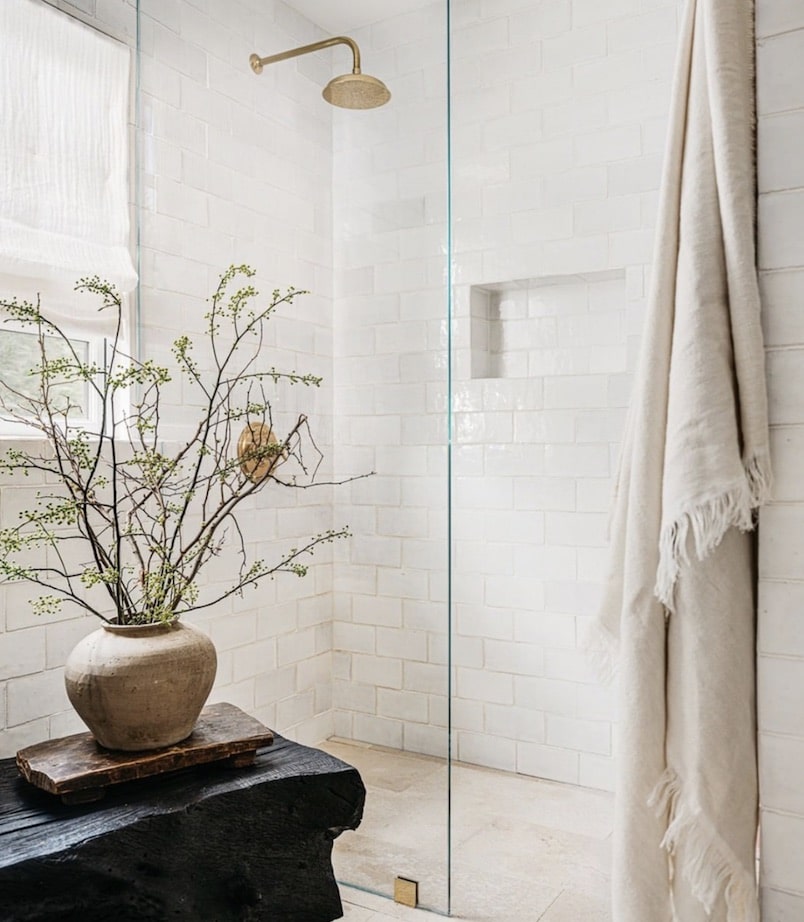 If you’re doing your part and social distancing from inside your home, you may start to notice small details of your house or apartment you hadn’t thought about before—such as why your older home doesn’t have a wardrobe, or how white subway tiles became so ubiquitous. You may also be wondering if there’s anything you can do—aside from the usual cleaning and disinfecting process—to help keep your home as virus-free as possible during the coronavirus outbreak.

Whether you realise it or not, a number of the design features in our homes today originated, or were popularised, because of previous infectious disease outbreaks, like the 1918 flu pandemic, tuberculosis, and dysentery. There is a very long, very interesting history of the intersection of health, architecture, and design going back to ancient times, but we’re going to skip ahead to the late 19th and early 20th centuries to focus on architectural and design features you could potentially find in your home today. Here are a few examples of home design elements tied to attempts to prevent or slow the spread of infectious disease.

Though household wardrobes have been around in some form for centuries, what we think of as the place where we store our clothes is a more recent innovation. In fact, when visiting (or living in) older homes or apartments, you’ve probably noticed (and bemoaned) the lack of wardrobe space. That’s because, up until the beginning of the 20th century, most clothing and related items were kept in stand-alone furniture. “It used to be that almost everything was [kept] in armoires,” Lloyd Alter, a former architect and design historian who now teaches sustainable design at Ryerson School of Interior Design, tells Architectural Digest’s Clever. “When you look at the plans from the turn of the century, the wardrobes are tiny, tiny, tiny—if they exist at all.” The switch to wardrobes was to make rooms easier to clean.

Bulky furniture items like armoires were difficult to move and therefore collected dust, which was thought to pass along germs.

By the mid-1920s, Le Corbusier was writing about the importance of minimalism, cleanliness, and hygiene in home design, advocating for built-ins throughout the house, which eventually became the norm. 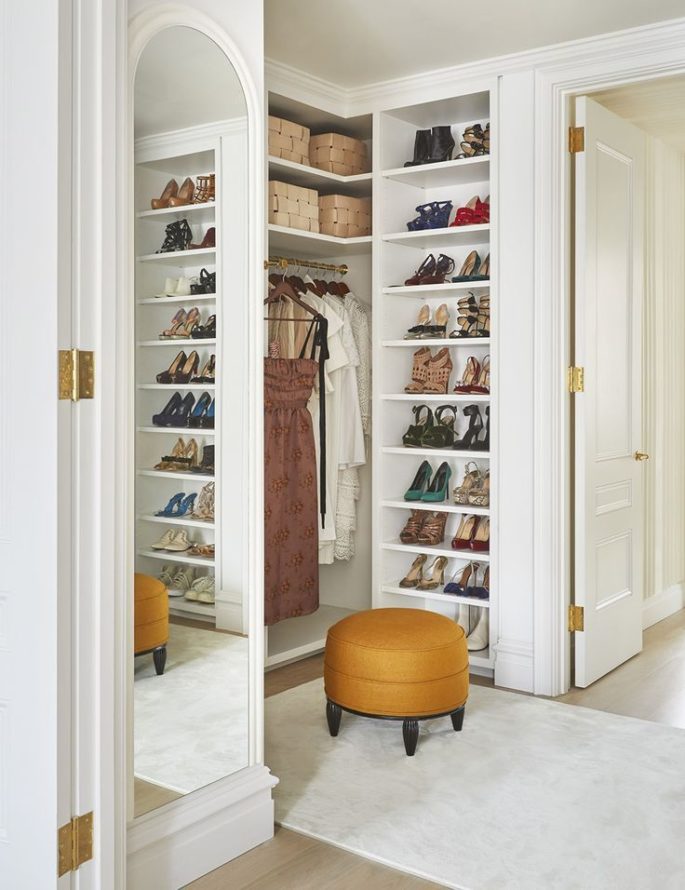 Though household wardrobes have been around in some form for centuries, what we think of as the place where we store our clothes is a more recent innovation. Image via Eye Swoon instagram.

Turn on any HGTV home makeover show and there’s a good chance their kitchen renovation involves scraping off peeling wallpaper or a hideous paint job and replacing it with white subway tiles. And why not? They’re classic, shiny, and easy-to-clean. They may even make you feel as though your kitchen is a more hygienic place to prepare food, and that’s exactly the idea. In the late 19th century, as people were beginning to understand how infectious diseases spread, public buildings—hospitals in particular—installed white tiles so workers could immediately spot any dirt or grime, and easily wipe it clean.

Childs Restaurant, an early American chain, adopted white subway tiles to conjure the sterile environment of a hospital and make people feel safe eating there at a time when foodborne diseases like typhoid, botulism, and trichinosis were a major public health concern. Along with tiles, linoleum replaced hardwood floors and oilcloth as the sanitary flooring of choice, also thanks to being easy to clean. 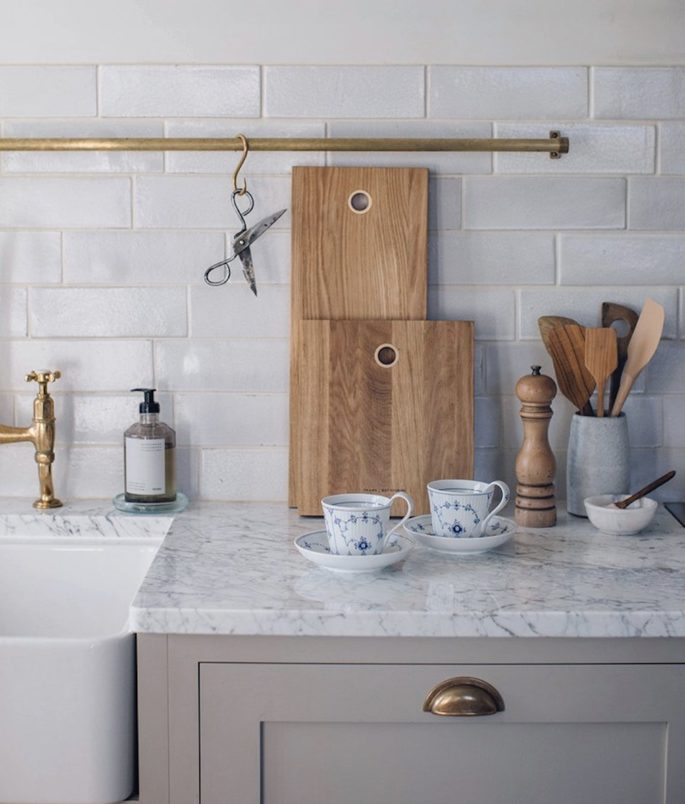 White tiles make you feel as though your kitchen is a more hygienic place to prepare food, and that’s exactly the idea. In the late 19th century, hospitals in particular—installed white tiles so workers could immediately spot any dirt or grime, and easily wipe it clean. Image via Remodelista.com

If you’ve ever noticed a strange room protruding from the second floor of a Victorian house that doesn’t seem like it quite fits with the rest of the home, it’s likely a sleeping balcony. Though porches themselves have been around for a long time, and have been used as a place to sleep while escaping the summer heat, sleeping porches became popular during the tuberculosis epidemic of the late 19th and early 20th centuries.

In a time before antibiotics, sunlight and fresh air were the best-known “cures” for the deadly disease.

A small mountain town in upstate New York called Saranac Lake drew health-seekers from all over the country who came to take the “fresh air cure” in one of the village’s many sanatoria and “cure cottages.” These cure cottages contained “cure porches” where those with tuberculosis could rest outdoors. According to Mary Hotaling, the architectural historian for Historic Saranac Lake, the difference between cure porches and sleeping porches is that sleeping porches were typically added onto the second or third floor of a house that was already built, while cure porches were an integral part of the design of cure cottages from the beginning. People with tuberculosis also flocked to the American Southwest—Tucson in particular. “One thing that we have as a result of tuberculosis is the ‘Arizona room,’ which was basically a sleeping porch,” Jennifer Levstik, an architectural historian and consultant with Logan Simpson, tells Clever. “They are basically balconies that are screened in and usually on the back of the house—and that’s something that was part of treating the illness.” Australia copied the model with houses and apartments adding sleeping verandas around the same time.

Powder rooms—or half baths on the ground floor of a house near the front door—are also the result of the attempt to prevent the spread of infectious diseases in the early 20th century. Those were the days of having daily coal and ice deliveries: “There was no Amazon guy dropping it off at the door and taking a picture of it for you,” Dr. Kelly Wright, who teaches American history at the University of Cincinnati and specialises in the historic use of colour in architecture, tells us. In other words, every day, at least one delivery person would traipse inside your home after being inside many other homes, including some where people may have been sick with something contagious. “The iceman is coming right into your kitchen, and if the iceman needs to use the bathroom, you don’t want him using your family bathroom. So the half bath made perfect sense for visitors to the house.” And, as Alter points out, having an accessible sink on the ground floor of homes made it more convenient for people to wash their hands—which, as we’ve been reminded of a lot recently, is crucial for health and hygiene.

At this point, it’s too early to tell what kind of home design innovations will come from the COVID-19 outbreak, but chances are good that features to help prevent or stop the spread of infectious disease will be top of mind again. Alter predicts the return of the vestibule—this time, with a sink immediately as you enter. This would serve as a distinct transition zone between the inside of the home and the outside world, giving people who enter the opportunity to take off dirty clothes and shoes and wash their hands. *Lead image via Devol Kitchens.

If pandemics like the coronavirus become the new normal, we may see the influence of the “sanitation craze” in our home design again—especially if the sterility could also provide some peace of mind. Powder rooms on the ground floor of a house near the front door are  the result of the attempt to prevent the spread of infectious diseases in the early 20th century when daily deliveries were made to houses. They prevented deliverymen using the family bathroom. Interior designer’ Lynda Kerry’s powder room in Sydney. Photo: Abbie Melle.

This is an excerpt from an article that appeared in Architectural Digest.