Los Angeles is having a renaissance. Here's what's new and great. As the Frieze Art Fair makes its debut in the City of Angels, we loved Tatler magazine’s recent pick of the chic hotels that will best cater to artistically inclined guests.

Los Angeles, you may have heard, is having a renaissance. It’s been quietly, stealthily, redefining itself. And a groundswell of cool has taken over. In a city known for old-school, over-the-top hotels, these new crop of contenders are forcing the old-timers to step up their game. The Los Angeles you know is still there. It’s just cooler and it comes with a whole lot more chutzpah.

Without doubt one of the hippest hotels in West Hollywood, Petit Ermitage attracts a stylish crowd thanks to its Parisian-meets-Moroccan aesthetic. The boutique property boasts a rooftop pool with striped daybeds and all-day bar, plus a chic gardened patio area for dining. There’s also a fireplace to gather around with individual armchairs and sofas, with blankets aplenty for keeping warm on cool LA nights. With local artwork throughout – often from the current artist in residence – its owner Stefan Ashkenazy’s own artistic background is evident in every corner. +1 310-854-1114, 8822 Cynthia St, West Hollywood, CA 90069, www.petitermitage.com 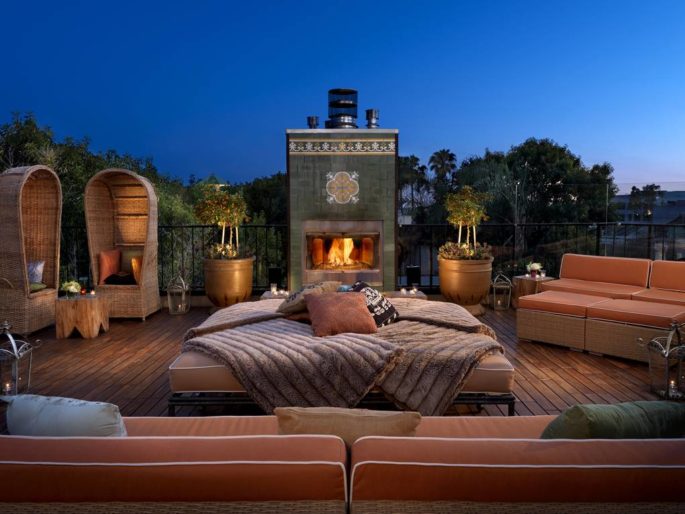 Villa Carlotta is a favourite among Brits in LA – including Edie Campbell, Lady Mary Charteris and Poppy Delevingne – who visit for its Soho House-esque feel. Designed with creatives in mind, it features plenty of communal spaces for guests to mingle in, including a large lounge, palm tree-filled courtyard and roof terrace. A former Hollywood hotspot in the 1920s (Montgomery Clift lived here); it’s become the place to be yet again thanks to a $5.5 million renovation. Designed for long-term rental, rather than a fleeting trip, it’s good for those wishing to stay in town for a few weeks. +1 323-628-6628, 649 S Olive St, Los Angeles, CA 90014, 5959 Franklin Ave, Los Angeles, CA 90028, www.villacarlottala.com One of the most talked about new hotels of last year was Number 850, the latest from The Sunset Tower hotelier Jeff Klein. The 23-room boutique hotel couldn’t get further away from the flashiness of the iconic multiple-storey property, with low-key mismatched furniture and one-off pieces like giraffe-shaped lamps and bespoke printed curtains. The roof terrace is the perfect place for arty-types to gather during the nightly mezze hour (wine included) with its peerless panoramic views of the Hollywood hills and Downtown LA as the backdrop. +1 424-313-8650, 850 N San Vicente Blvd, West Hollywood, CA 90069, www.hotel850bis.com 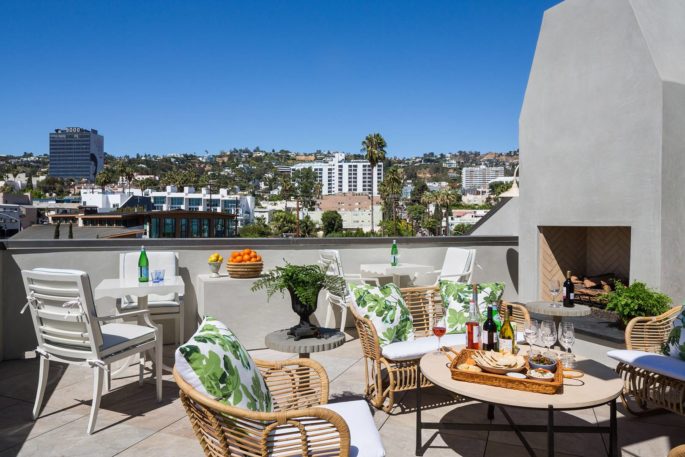 If you’re looking to stay somewhere with a little more privacy, away from the prying eyes of hotel staff, then Third Home is our favourite rental option. A chicer version of Airbnb, the luxury travel club is only open to those who already own two homes, and are looking to stay in a third. A property that caught our eye is this Tuscali home, a little piece of Tuscany in Southern California, with four bedrooms, three bathrooms and an excess of hillside views. www.thirdhome.com This second installment of the NoMad group (the first is in New York, a third is planned for Las Vegas) has brought a slice of Big Apple cool to Downtown LA. Situated in the rapidly gentrifying Jewelry District, it’s housed in the former Bank of Italy and still has many of the original Twenties features, such as grand Doric columns and an ornate gold ceiling in the lobby. It’s owned by Sydell Group who are also behind The Ned in London, and as with that brilliant bank takeover they’ve made use of the building’s vault, only here it houses the restaurant’s loos instead of a bar. Parisian master of seductive interiors Jacques Garcia (of Hotel Costes and L’Oscar fame) is responsible for the design, and there are plenty of dark corners for canoodling on jewel-coloured velvet sofas – in the sultry library, perhaps, or the discreet restaurant, Mezzanine. Rooms are cozy, with enormous beds, freestanding bathtubs, and views to the neighbouring skyscrapers. For a dose of that famous LA sunshine, head to the Mediterranean-inspired rooftop pool, the hotel’s buzziest spot, to sip a frozen Piña Colada up in the (non-existent) clouds. Located on the corner of 7th and Olive Street, The NoMad Hotel in Downtown Los Angeles continues in the spirit of the original NoMad in New York by taking residence in the historic building, Giannini Place. Originally built in the 1920s as the headquarters for The Bank of Italy, the building’s gold and blue Italianate lobby ceiling has been fully restored and serves as inspiration throughout. Honoring its rich history, The NoMad Downtown LA Hotel naturally balances the integrity and character of the Neoclassical landmark with a contemporary California design sensibility. As in New York, we have collaborated with Jacques Garcia on the design and Chef Daniel Humm and Will Guidara on the restaurants, while adapting our approach to seamlessly blend into the vibrant tapestry of Downtown L.A. +1 213 358 0000, 649 S Olive St, Los Angeles, CA 90014, www.thenomadhotel.com